The Art of India: Travels in Prehistoric Madhya Pradesh

We’ve been writing about Madhya Pradesh for many years now, so we’ve all grown quite familiar with its long and varied history, but it wasn’t until we started researching and travelling for Rock Art of Madhya Pradesh: Travel Guide that we realised how MP’s past stretches wa-ay back into the really, truly long ago.

An utterly unpredictable concatenation of geographical phenomena means that the ‘heart of India’ is chock full – quite literally – of ‘rock shelters’. Typically, a rock shelter looks like somebody armed with a really big spoon scooped a chunk of rock out of the side of a mountain – leaving a little hollow, complete with an entrance, a roof and a floor. In fact, the perfect place to catch your breath – particularly if you were wandering the prehistoric jungles of central India and were in no mood to confront a hungry tiger. 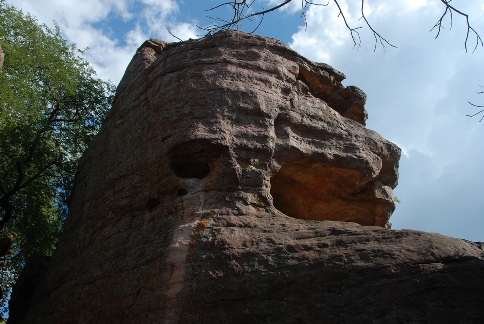 The Bhimbetka hills have over 600 shelters. This one actually looks like a hungry tiger

Tens of thousands of years ago, the men and women of the Stone Age wandered through these thick jungles, climbing up the many undulating ranges of MP – and turning the Vindhyas, the Satpuras, the Kaimur hills into crowded colonies.

Adamgarh was a tool-making factory 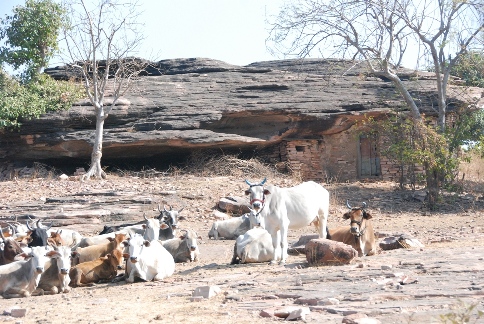 For Rock Art of Madhya Pradesh, we went tramping in the footsteps of our most distant ancestors, and discovered how they spent their spare time.

One hundred thousand years ago, people made ‘cupules’ for art. There’s a whole wall of these spherical hollows in Dar ki Chattan, Mandsaur district.

Paintings like this mythical boar on the Cobra Rock in Bhimbetka are relatively recently. Only 20,000 years old, or so.

And herds of animals are a common theme

No matter what they were painting, though, prehistoric settlers certainly knew how to pick the most scenic spots.

Posted by parvati sharma on July 3, 2012 in goodearth guides, Uncategorized

Mumbai is breathing in relief. All that eventually happened was that 640 tonnes of garbage were hurled at the city by waves rising as much as five metres high and crashing on Mumbai’s shores over three days of high-alert readiness. The city waited with bated breath: high tides coupled with monsoon rains might have invoked a reprise of the nightmare floods of 2005.

Fortunately, the sky held its peace; and it is still cloudy but dry when I arrive in the last week of June. The breeze is cool and the occasional, brief drizzle is refreshing.

The sea is calm at Juhu again 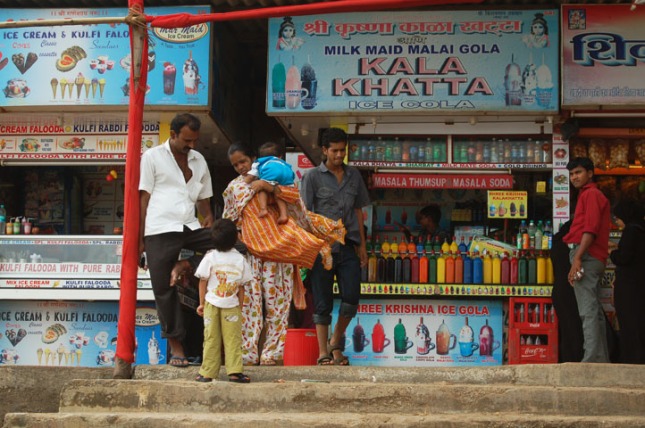 And the crowds have returned

My two days spent walking through Juhu, Versova and Bandra are a blur of images and impressions, tempered with an unshakeable sense of the city’s vitality and youthfulness. Everyone looks like they’ve just returned from an audition or are grabbing a quick coffee before heading off to the sets. On Juhu Beach, in the Sea View Hotel’s bar, a young man with dreadlocks reads a graphic novel; at another table, a young professional shares an animated beer with a friend.

In Versova’s Rolling Beans coffee shop, I almost don’t notice the musician and actor Lucky Ali sitting at a window table. My friend points him out in a whisper, then returns to her conversation with a long-haired photographer. He’s offering to shoot her portfolio; she is one film old in the industry and looking for funds to make her directorial debut.

Outside, I am trying to photograph an old bungalow called Daria Mahal, stuck between two towering sky-scrapers, when a driver advises me on the best angle to shoot from. He’s from Bihar – from Raja Janak ji’s village, he tells me. A little further, another old compound of houses is called “Fantasy”, though the spirit of this invitation is somewhat dampened by the accompanying caveat: “Sorry Visitors. No Parking For You Inside”.

An old bungalow sits quietly in the busy streets of Versova 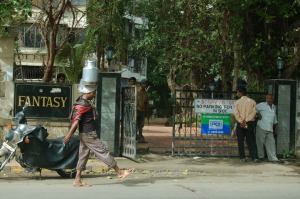 The next day, we visit Mehboob Studios, one of the oldest studios in Mumbai, established in 1954 by Mehboob Khan, director of, amongst many others, the classic Mother India. A friend smuggles us past the sceptical guards. “Just say you have to go to Studio 5. Or tell them you have to meet someone: Mehta ji ne bulaya hai.”

A large crew is gathered outside the studio where Sanjay Leela Bhansali’s latest grand venture is being filmed. I turn away for a second and miss Hritik Roshan alighting from his car. Now, only the long black BMW remains.

The world's stage awaits its players

I take a few surreptitious photographs, but the guards are beginning to prickle, so we leave. An auto takes us through the damp air to Bandstand, and the two coffee houses a 5 minute walk from Shahrukh Khan’s house. Two waiters from Barrista and Café Coffee Day have been posted at their respective entrances – they trade friendly insults, jousting for our custom. Both are crowded with the very young and stylish. At every table, it seems, a glorious future is being planned.

We reach home past midnight and go up to the terrace for a nightcap. Fifteen floors below, the lights of a dense slum leap into the air, brighter than anything in the cloud covered sky. Bombay has few stars at night; instead it has its people, forever wakeful, their eyes glimmering with a million notions of ambition.

No star ever shone as brightly as Mumbai's aspirations