So the latest project is a monumental one. Not just for the dimensions of the book… it’s a coffee-table… but its not just another coffee-table…its on the monuments of Delhi…yes, there’s one on every road… and its commissioned by the Archaeological Survey of India…yes they’re sprucing them all up… and its part of the intriguing run-up to the Commonwealth Games 2010…yes, need I say more? Anyhow there is more as regards our experiences working on this project, and we thought we’d fill you in on it in a series that the Goodearth team has lined up for you. Say Hello Delhi, we’re on the trail of the torch!

Presumably one of the city’s oldest extant structures is the edict of the 3rd century BC Emperor Ashoka proclaiming his expansive conquests through Dhamma ­– the great precept of Buddhism that took the age by storm – and enlisted in the ASI Inventory of Monuments as Edict in Srinivaspuri for the benefit of the interested explorer, me. After asking seven Delhiites if they had an idea of where exactly in Srinivaspuri I would find the said treasure, I realized no-one really did. However, my father informed me that indeed there was such an edict near the ISCKON Temple in East of Kailash, which set me to rub my hands and charge the camera and set off in pursuit of the precious stone.

The hillock on which the edict stands was situated in a well-manicured fenced-off lawn at the traffic signal after the temple, with the hallmark ASI board saying Protected Monument and nothing else. So I knew this was it and walked in

The hillock with the edict

Up where the air is clear

and as I climbed the rocky hillock, was pleasantly greeted by some enthusiastic children flying kites. They were even more enthusiastic to stop flying them and come running to see the camera I was carrying, but I proceeded up the hill, and found a 10m x 10m shed, enclosing a 1m x 1m cage that enclosed our edict.

The Ashokan rock edict...no really, its there

I tried taking some pictures through the bars of the shed and then went looking for the caretaker, only to be informed that he had left for the day (it was 6 pm) and nobody came to look at the edict at that hour. What he didn’t add perhaps was that nobody came to look at the edict at all, so I felt a tinge of sympathy for the guide, and asked when the keeper of the keys to the kingdom would be present. Come at 12, said an inebriated man who always came to the park to play ludo/cards and never really knew it to hold other attractions. But neither, I suppose, did I.

Footnote: The rock edict was actually discovered by a building contractor in 1996…it was thereafter that ASI built the cages and the shed. 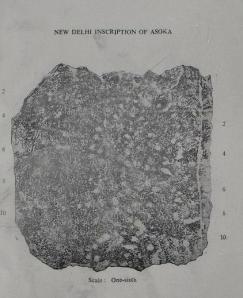 Picture of the edict: Courtesy ASI